howdy..i am seeking information regarding one hans hirning...i believe he was a knights cross winner and also won a tank destruction badge...

1. did he receive a german cross in gold?
2. was he a member of an assault gun crew?
3. what other awards did he receice?

As far as I know, Hirning was not a member of an assault gun crew. He won his Knight's Cross for destroying a russian anti-tank gun with a demolition charge as the russians threatened the german lines. So a local russian breakthrough was prevented.

Source: "Their Honor was Loyalty - An Illustrated and Documentary History of the Knight's Cross holders of the Waffen-SS and the Police" by Jost W. Schneider (1993).

According to the book by Schneider, and also supported by Karl Ullrich's "Wie ein Fels im Meer - Kriegsgeschichte der 3. SS-Panzer-Division "Totenkopf"", Hans Hirning did not recieve the German Cross in Gold.

Here's a picture on Hans Hirning when he recieved the Knight's Cross on October 23, 1942...

According to http://www.das-ritterkreuz.de Hans Hirning was just 19 years old when he recieved his highest award. As you can see, the picture confirms that he also had one Tank Destruction Badge. Apparently, he was in a mortar (Granatenwerfer) unit in the 6./SS-Totenkopf-Infanterie-Rgt. 1.

thank you for your reply re: hans hirning...it helped alot...i am seeking the names of people who won a tank destruction badge with the rank of oberscharfurhrer and who also had a german cross in gold, and who were members of an assault gun crew....can anybody help...kind regards,,,karlo
Top 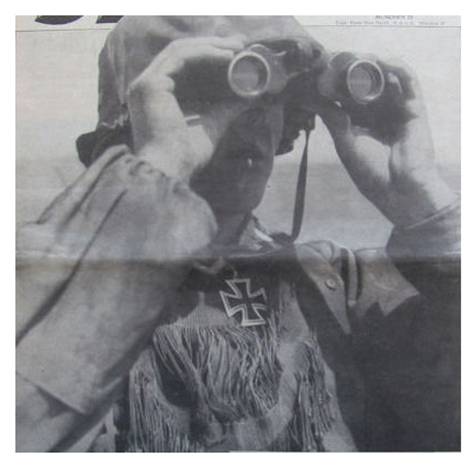