I thought I would show a few of my favourite photos. Maybe you can add a few of yours too. I have also comments on why I like it, which I think is quite important.

This is one of those spur of the moment photos. You just can’t plan or set up for taking a photo like this.

This photo doesn’t give as much historical information as some photos but it does give an insight into the sheer resignation of someone when captured. (I think this is depicted quite well).

That's one of mine...speaks for itself I think....

(I like to wonder how this photo came to pass, what the photographer thought of the situation, what had just happened, if this soldier survived somehow...it is so NOT propaganda material...)

That is a great Photograph M.H.

I have seen it before with a simple caption “Exhausted”
Fallschirmjäger - Nick M.
Top

That's my favourite one, as it shows a veteran's defiance, by still wearing his uniform after the war. well, I guess who you know that soldier is.....

But of course, this is nothing political. (disclaimer)
Top

I find the following photograph very touching since every soldier of every nation has a family that saw him being born, playing around as a beloved child and growing up to be man. Then comes war...

On this specific photograph I imagine the Son going on to war and his Father accompanying him for maybe the last time...

I am not sure which is more moving: the text accompanying the photo, or the photo accompanying the text. Yours would surely get my vote if this were an "awards ceremony" (I hope you understand what I am trying to convey here).
Top

although this picture is probably posted many times before on this forum, it is one of my favorites as it shows the human side of Waffen SS soldiers.

Thank you Sepp, for your comment! I think it's easy, especially when people are younger, to just see the famous, the scary, the flashy side of WWII (or any war, for that matter)... Knight's Cross bearers, tank aces, fighter pilots, heavy tanks etc. When it's really about real human beings killing other real human beings for some ??? reasons... The Human backside of war is the reality/tragedy for nearly all participants, aggressors and victims alike.

And Helmut, yes that is an often seen photograph... I don't really agree that playing with a Kitten shows a persons "human" side! (Not saying that a Waffen-SS soldier couldn't have a "human" side). Personally I think that the value of this particular photograph is the duality of the Kitten and the Egg handgrenade... What are these Estonian SS-Grenadiers really playing with...?

I know what you mean, I was and at times, can still be guilty of those sorts of enthusiasms. If it wasn't for that particular picture, I probably would have opted for a "cool" (I mean that as a figure of speech, not in a derogatory manner) Kurt Meyer picture or some other picture maybe taken in action.

I have never been on active service, let alone been in battle, which is why that picture coupled with those words you employed, kind of touched a raw nerve with me... both as a son and who knows, maybe later, even as a father.


The "facelessness" actually makes the picture even more personal. They are shown neither smiling, crying or whatever, just that intimacy between a father and son which is seldom uttered but which you know is always there.
Top

I sure like the Dare Devil looks and proses in this pic of Peiper in battle, riding on a Kubelwagen

This is NOT Peiper!

lol, well, I saw that pic in a military history book in my school ibraray before, it had the captioning 'Peiper'. But anyways, it could be just a randomn Waffen SS officer there who had a crusher cap. but still, nice prose, etc.

I agree that the "facelessness" of the father and son strongly enhances the meaning/value of this photo , and the possibility for different persons to interpret maybe different emotions... The bond between Father and Son... yes...

As a Swede, I have had the great luck not to participate in any war. Neither have I done any UN foreign service. I did my compulsory military service (1 year) in the army almost 25 years ago, as have 95% of Swedes my age. Today maybe 30% of every age group actually do their military service.
I also have a son that will be five years this summer and as much as I respect military personel (many close friends of mine have this profession), I still wouldn't be overly thrilled if he (or his big sister) choosed this path in life. The bond towards one's children is as strong as it's hard do describe. You'll find out...

If my memory serves me right, this very famous still from the german offensive in the Ardennes 1944 shows a vanguard recce group from Peiper's Kampfgruppe and the cool looking guy is actually a NCO.

This picture has been so often and widely published, very often stating that it's Peiper himself. This wishful thinking would make it perfect! I mean, just think of the composition of the motive...

Some elite/hard/cool looking Waffen-SS/LSSAH/KG Peiper soldiers that are spearheading the greatest german offensive/failure in the West after 1940 while riding a cool (?) german Schwimmwagen through the belgian forrest AND passing/posing at a roadsign saying MALMEDY!

Taking the massacre that took place there in consideration, then must the obvious leader in this picture be Jochen Peiper.

This is probably a "truth" for many casual WWII readers...

This is probably a "truth" for many casual WWII readers...

there are too many of them. 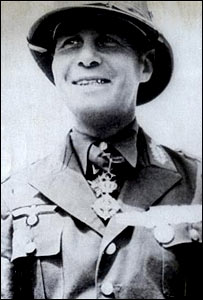 I always thought that Rommel looked cool in a pith helmet.