Say Niebelung, don't worry--this is the public version. You will appear in all of your bravery in the private version.

Bestens,
~D, the EviL
Death is lighter than a Feather, Duty is heavier than a Mountain....
Top

Jonathan
Cheers Jonathan,
Only the spirit of attack borne in a brave heart will bring success to any fighter aircraft, no matter how highly developed it may be.

See Guys, the problem (which was not ever a real problem when I was writing it

) is that this work was written for a specific audience--almost entirely male, definitely military buffs, and definitely folk interested in mayhem and heroism.

So the question becomes--in brutal Capitalist terms--how to appeal to a larger audience?

Just suppose I'd like to turn this into something with a hope of being published?

Well, first thing is that I have to eliminate names like "Phylo" (No offense intended Phylo) and decide on a definitivespelling for "Valery Sonofovich" in order to turn it into a more realistic historical fiction novel. And then there is the question of a "love interest", since, after all, women read more than men!!!!!!! So Ursula and Erika's roles have to be expanded.

There are many other changes that have to be made, not so much in the fabric of the story or its main plot, but definitely to make it more understandable to...erhh...outsiders. I knew when I wrote the story too that I took some shortcuts and didn't explain some things well enough. Personally, I'm not satisfied with the Soviet side of the siege or the actual events of the siege. These points need to be sharpened up. (Not that I intend to change any Soviet or German atrocities except to write about them better.

My one request to the Forum is that, for the sake of conformity, could those who chose names that don't fit into the Historical or Linguistic subtext of the area please give me new suggestions for character's names?????? That way, if a book ever comes out of this, you will know that you are a certain character.

Bestens,
David
Death is lighter than a Feather, Duty is heavier than a Mountain....
Top

David Tennant is in da house!!!

"Well, my days of not taking you seriously are certainly coming to a middle." - Malcolm Reynolds
Top

Jonathan (formaly Jahn)
Cheers Jonathan,
Only the spirit of attack borne in a brave heart will bring success to any fighter aircraft, no matter how highly developed it may be.

TPMM wrote:You mean a lot of new words and a lot of... everything?
Can't wait to :]

Having talked with Davidov about this, you'll be happy to know that the story won't be changed so much. However, it would have to be a little more historically accurate. Which means, for example, no green Pumas. There'll probably be a Puma in there, but I know for certain that the drivers will be good German men (I'm going to nominate one from München and one from Essen, but that's just me), not a hobbit and a leprechaun!!
TLH3
www.mapsatwar.us
Feldgrau für alle und alle für Feldgrau!
Top

but I know for certain that the drivers will be good German men (I'm going to nominate one from München and one from Essen, but that's just me), not a hobbit and a leprechaun!!

Excuuuuuuuse me - how more Germanic can you GET than small stunted people...the Dwarf Caverns in Hasel, the many caves in the Harz Mountains and Hohenstein reputed to be the home of dwarves and mine kobolds over the centuries...even Alberich the Nibelung Dwarf that forges the Ring in Wagner's Ring Cycle!!!

You should be standing up (on a box) for the rights of Germanic "little people"!
"Well, my days of not taking you seriously are certainly coming to a middle." - Malcolm Reynolds
Top

Why this tale and not one of the previous others?
Thanks. Dave.
Top

phylo_roadking wrote:You should be standing up (on a box) for the rights of Germanic "little people"!

You'll note that my two drivers are Frodo and Sam. Neither of them is named Gimli, or anything similar. Germanic, they ain't!


Why this tale and not one of the previous others?

While David has done a fine job with all the tales, this one more than the others (well, except maybe one or two) comes closest to a real story about the war in Prussia. It'd probably be the easiest to turn into an actual historical novel. Of course, that's just my opinion, which has been shared with David repeatedly!
TLH3
www.mapsatwar.us
Feldgrau für alle und alle für Feldgrau!
Top

Hey, you serious? Can it possibly be we managed to cajole DCC into monetizing the forum heroes?

Its for your own good DCC. I mean if Baen can publish a book like "Watch on the Rhine" (Waffen-SS veterans rejuvenated to fight invading aliens) and Sven Hassel's crap can still get republished in 40 languages ....

Of course, ideally it would be a "graphic novel" in the old British style 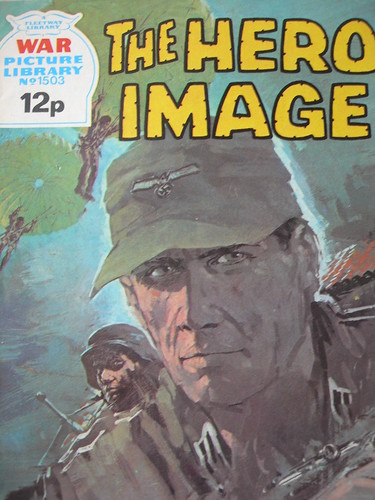 And Zack Snyder could do the movie ....
Top

Actually, Kamerad, your thoughts aren't far from my own!

There is talk of publishing the Forum Hero Tales, or at least some of them, in a commemorative type book format. Some of the shorter Tales could easily lend themselves to the comic format. I was actually just a few hours ago thinking of how to do that with The Castle of Horror. (Not because it's "my" character, but because of the length and type of the story).

If there was someone here that did that sort of artwork, they could have fun with it. If we knew someone who could make an animated film, we could really have some fun with it! Youtube, here we come!!!

By the same token, if I look at the past tales, there are only one or two that would make a good historical novel. This one has the most promise (again IMHO), because there are several sub-plots in it that can be expanded, such as Ursula's story. In other words, like the turret of a Panzer IV, it has room for growth!

Definitely deserves a major character to carry it.

Well, I hope these plans come to fruition and I promise you I won't let any Forum Hero down in the end.

Bestens,
David
Death is lighter than a Feather, Duty is heavier than a Mountain....
Top
Post Reply
905 posts