Doktor Krollspell wrote:So, how and where was this supposed to be used?

The Wurfgerat 41 launcher was intended to launch rockets from submerged U- Boat's . The target was to be the U.S. East coast.
CAN'T TALK; GOTTA SHOOT
NS38th_Aristaeus
http://www.Pacificwrecks.com
Top

So, finally a winner in Herr Aristaeus!

All the images where taken from http://www.prinzeugen.com

What is this weapons name and use.

Did I not give enough clues, or did u guys quite playing?

I never quit playing, Aristaeus! I just haven't been able to identify the darn thing yet...

Well, the fight continues... I've tried rockets and guided missiles and so far nothing, or maybe I'm just barking up the wrong tree...

~S~ Krollspell
This is against my better judgement lol, it won't be ofton that I will be able to stump a community such as this on matters of weapons ( patting myself on the back lol) but I will give u a few clues.
WWII, PTO, United States.
Also look at the weapon, it looks like a min plane but look closely. No prop and no exhaust, or funnell for rocket propulsion.
This weapon has no propulsion other then gravity, but it is guided.
hope this helps and welcome to the wonderfull world of U.S. secret weapons.
CAN'T TALK; GOTTA SHOOT
NS38th_Aristaeus
http://www.Pacificwrecks.com
Top

THE WEAPON ON THE WING OF THE B-17 IS A ASM-2 BAT
AN EARLY GYROSTABILIZED GLIDING BOMB THAT HOMED IN ON THE TARGET BY AN EARLY S-2 RADAR.
CHUCK
PS NOT I DON'T HAVE ANOTHER WHAT IS IT? SO CARRY ON.

below is a bit of info on this weapon.

The Bat was a glide bomb carried by a Navy PB4Y-2 Privateer patrol bomber or other aircraft and was designed to destroy ships and offshore enemy targets.Visual contact with the target was not required.

Launching Characteristics:
Launching altitude: 15,000 to 25,000
Launching speed: 140-210 knots
Range: 15 to 20 miles from its target
Payload: a 1,000 pound general purpose bomb warhead.
Steering Mechanism
The Bat was steered by controllable wing-mounted elevons driven by autopilot servomotors linked to the radar guidance system. The missile had fixed tail surfaces and was gyro-stabilized.

Dimensions
Length: 11 feet 11 inches
Span: 10 feet
Empty weight: 600 pounds
Loaded weight: 1,600 pounds.
Why a Bat?
When hunting or traveling in environments where visibility is poor, several species emit sound waves, then use their auditory systems to interpret reflected waves from prey or objects in their travel path. This ability is termed echolocation. By emitting a series of ultrasounds that either sweep from a high to low frequency or vary around a frequency, bats can distinguish, locate, and target prey.

The same idea applies to the Bat Missile. By transmitting radio waves, then interpreting the reflected waves with its radar receiver, the weapon guides itself to the target, even if the target moves after launch.

the Bat went overseas and eventually saw combat service in 1945, and destroyed several Japanese ships off the coast of Borneo including a destroyer. Several Bat Missiles were also fitted with modified radar systems and destroyed Japanese-held bridges in Burma and other areas. Thousands of Bat missiles were produced and went through several modifications.
CAN'T TALK; GOTTA SHOOT
NS38th_Aristaeus
http://www.Pacificwrecks.com
Top

What is this puppy?

~All you touch, and all you see, is all your life will ever be~
Top

I see that we're back to german missiles again.

This is the Ruhrstahl/Kramer X-4 wire-guided air-to-air missile. It was never used in combat since the BMW rocket engine factory was bombed and delayed production and delivery. Here's a nice pic on a Focke-Wulf Fw 190 A-8 equipped with two X-4 missiles for a test run in November 1944. 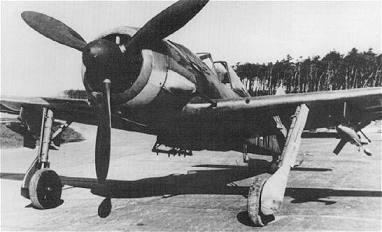 Well, since Max is off celebrating Christmas, here's the link (and source) to verify that his provided picture indeed is the Kramer X-4: http://www.wpafb.af.mil/museum/arm/arm29.htm

Now enough of missiles and such things and back to persons involved in the war... Next (Christmas) question is as follows:

Who was this Gentleman in civilian clothes and wearing the Knight's Cross around his neck? Name, and what did he do to earn this high award?

Hm... It's all the Christmas food maybe? Anyhow, time for a little clue then!

As you can see in the photograph, the Gentleman is saluting a Baton-waving officer in a maritime environment (the boat in the background) so yes, it has something to do with the Kriegsmarine... (I suppose you all see/guess who the Officer is?)

And this makes it real easy!

The answer to my riddle is Paul Hellmann, who was a Handelsmarine Kapitän on the MS "Osorno", a blockade breaker. Kapitän Hellmann recieved the Knight's Cross on 06.01.1944 from Grossadmiral Dönitz and was the first civilian, as a member of the Merchant navy, to recieve this prestigeous award. He later recieved the rank as Oberleutnant z. See in the Kriegsmarine.

I leave the field free for anyone to pose a photo question...

Who is the Man in Civilian Clothes, receiving a very special Sword from H. Göring...?