I came across to interesting wartime footage from youtube as follows:

Is it possible to identify the Waffen-SS general at the begining of footage? Or could anyone confirm that the person point out is a Waffen-SS general? For those could not able to open and watch youtube video, I'm enclosing some captures.Any further information on footage itself would be very appreciated.

The general is Heinz Harmel.
Top

Interesting collection of late war footage. As John pointed out, it is Harmel in the first sequences. There's German writing on the buildings, and it might be Pomerania in February 1945, or it could be Saxony the next month. There's no snow, so probably the latter.

Some of the scenes are Heer. The King Tigers (with transport tracks!) are next to a column of Panthers, while the Heer infantry walking past have Sturmgewehr. They are probably Panzergrenadiere from the same division as the Panthers. Most King Tigers in 1945, from what I have seen, didn't carry turret numbers. These ones have Zimmerit paste on them, and so were built prior to September 1944. That, and their small, neat turret numbers, suggests schwere Panzer Abt. 503, which was in Hungary and Slovakia in the spring of 1945. I didn't notice any cufftitles on the men, but this could well be Panzerkorps Feldherrnhalle around the time of the Südwind offensive against the Gran bridgehead.

The final footage is of a mountain unit, or an acclimated Volksgrenadier unit, in the Vosges during the Nordwind offensive of January 1945, when numerous American armored vehicles, such as the M10s shown, were knocked out. Audie Murphy of the 45th Infantry Division earned his Medal of Honor by using the .50 caliber antiaircraft machinegun on a knocked out M10 to repel a German infantry attack during Nordwind.
Top

A little bit more information to go with what john and marc have posted.
The king tigers are indeed sPzAbt 503 but the footage is from 1944 when the unit was re-building and training in Late august-early september 1944 prior to being sent to Hungary.
There are numerous still photos taken around this time.

The footage half way through showing the knocked out M-10's and the Sdkfz251 are also to be seen in a well known set of photos,the 251 is from 116th PD on the western front december or january if i remember correctly.

The first section of footage showing Heinz Harmel is fantastic,though i have not seen any still photos that match with this footage.

Hi, I’m new here – well, actually I was around quite often some years ago (Marc might still know me – hi Marc

As to your question, I couldn’t see the video as YouTube told me they have no rights for showing this footage in Germany (usually this message pops up with music videos I'd like to see

However, the pictures you posted are known to me. They are from the german Wochenschau (newsreel) as of December 14, 1944. It is the last part of the newsreel, covering events on the Western Front.
Translated into English, the commentary to the Harmel part runs as follows:
„ Bearer of the Oakleaves, SS-Brigadeführer Harmel, commander of SS-Division „Frundsberg“, who by his personal engagement contributed very much in stabilising the frontline in his sector, in his armored personnel carrier drives to an advanced battalion command post. (It is very unsual for the Wochenschau to mention the exact unit of a soldier it calls by name. Usually it would only say "General xy, commander of a Panzer-Division").
Jabos attacking!
Out of the car – taking cover!! (very dramatic voice)
Seconds of waiting turn into an eternity.“

Here the newsreel switches from Harmel to some infantrymen taking cover from the same Jabo attack as Harmel. Or so we are told, which is of course not true, but only said to make for a fluid transition of the pictures shown.
During the next part, the newsreel shows infantry men, flamethrower-SPW and two short glimpses of Königstiger. The commentary declares that these are „our frontlines along the (river) Roer and around Geilenkirchen“. While an artillery unit is shown, we are told that this is a battery of 9.Panzer-Division, „which was mentioned in the Wehrmachtsbericht“. The 9.Panzer-Divison was mentioned in the Wehrmachtsbericht of November 26, 1944.

Given these informations, it is obvious that Harmel is shown during the fighting of his divison around Linnich (east of Geilenkirchen) lasting from end of November to the beginning of December 1944. 10.SS-PzDiv took over the sector from 9.Panzer-Division. Schwere Heeres-Panzer-Abteilung 506, equipped with Königstiger, was attached to 9.PzDiv. during these fighting. So it’s also clear that the Königstiger shown are from this battalion.
Harmel’s divisonal command post was in the village of Hottorf at this time, so I presume he starts his ride in this place.

The newsreels were extensively edited and you will find clips from June still being used as 'new' footage in August. 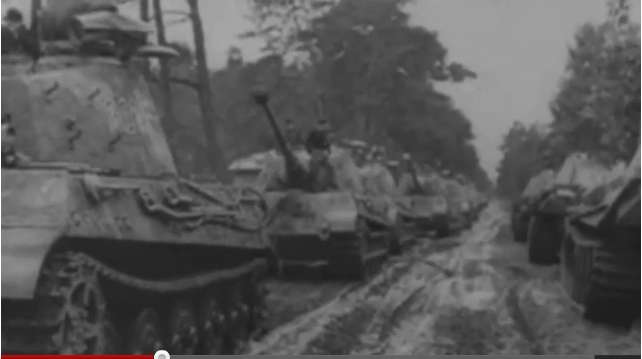 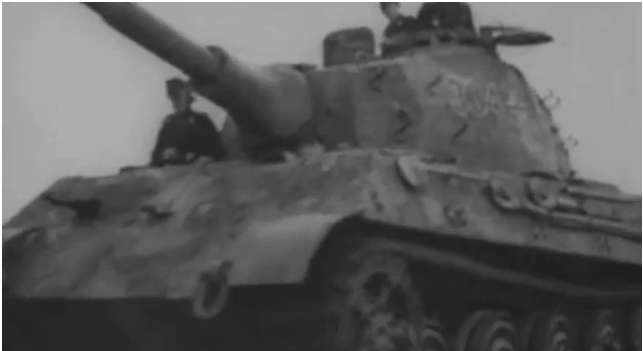 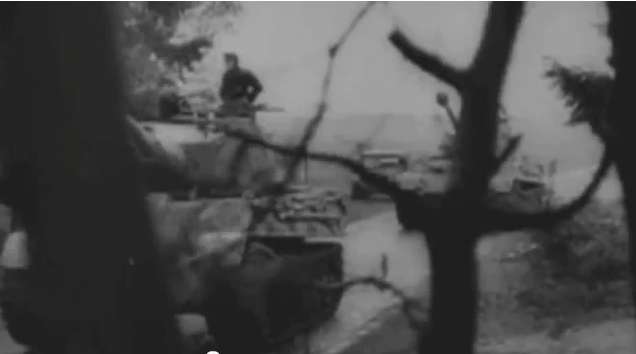