by Kameraden
I was not sure what to call this thread.
But settled for Favourite Action.

A difficult subject i know.
How to measure one mans actions and courage against another.

Also many equally Brave Men fell in the line of Duty and would have merited the KC'but there was no witnesses to their Brave actions except Enemy Soldiers and the Dead.

Also generally for a KC to be awarded for Gallantry it generally means that Enemy Soldiers must have fallen or been injured/Captured in the action involved.And they must be remembered too as worthy Men.So worthy that their defeat merited the Award that is the KC.

So this is not a Competition'but a Celebration of the Humble Soldiers of all sides Courage and Spirit in the most adverse of conditions.War is Horrible'but the Human Spirit shines through.

I have some favourites Like Fritz Christen'Remi Schrijnen and Gerardes Mooymann.Maybe it's because i am most interested in the Waffen-SS that i know more about their actions that one of the other Branches of the Wehrmacht.

However my nomination goes to Obergefreiter Eduard Hug

"Hug lay in his Foxhole with his MG42 awaiting an enemy attack and his position soon came under a furious assault.Having no clear field of fire Hug was horified when the Machine Gun covering the area fell silent.Hug picked up his own MG and ran towards the Knocked out MG post.As he ran he saw some 70 or so enemy Infantry approaching fast and realised he would never make it in time.He stopped where he was totally exposed to enemy fire and slung his MG42 by it's strap from his shoulder and opened fire.The MG with it's high rate of fire tore into the enemy ranks who soon retreated.Hug quickly got into the Foxhole and set up his MG.6 further attempts were made by the Russians to storm Hugs position'but each time he drove them back.As the light began to fade'a 7th attempt was made.Each time Hug attempt to fire back he was forced to duck behind cover.The enemy gradually came closed and were soon within 30 Metres of his Foxhole and Hand Grenades began to fall around his Foxhole.To Hugs horror his MG jammed and he had'nt time to clear it.Hug did not panic and began to throw his Hand Grenades.The leading enemy troops faltered and this allowed Hug to clear the stoppage.Hug now opened fire again and his MG scathed great gaps in the enemy ranks.The survivors panicked and ran leaving some 60 dead around Hugs position.......

Beat that Guys
by Jason Pipes
This is an EXCELLENT thread, thanks for getting is started.

Thanks for posting such a thoughtful and sensitive preface to your posting on this topic. Very well said indeed.

I'm sure most of you know by now about the online database of all RK holders here on Feldgrau. If not, here it is, all 7000+ of them.

Just a few minutes ago I added a new section to the RK database regarding the details of each RK holders award. Not many RK holder listings include information on this yet but I would like to use this opportunity to post any information we can gather here in this thread to the database for each person. I'll add the detail regarding Hug below ASAP, for example.

The more details on this excellent and very interesting topic we can gather, the better!

I would ask that any details posted here include brief mention of the source as well if possible.

Thanks in advance to everyone! Let's make this a great and detailed thread!!
by Kameraden
Thank you Jason.

Come on guys.
Give your examples.
Then Jason can add them to the KC Database.
by Panzer Mooyman
"Gerardus Mooyman:

On 13 February 1943 a 20-year old Dutchman single-handedly knocked out 13 Soviet tank's with his French made PaK 97/38 during the attack in the Lake Ladoga area. Gerardus Mooyman a volunteer with the Waffen-SS Freiwilligen-Legion Niederlands became the first non-German to be awarded the Knight's Cross of the Iron Cross. By his own admission however Gerardus was a rather unenthusiastic soldier and was sulking in a bunker when the Soviet forces attacked. A German officer attached to the Dutch Legion practically dragged him out by his ear and the angry young Dutchman vented his fury on the advancing Soviet armour."

There's also a story Mooyman singlehanded destroyed a soviet cannon the night before the 13th. The Soviets were dugging in an anti-tank cannon after the first wave of attacks were repelled by the Dutch. Mooyman crawled to the position and placed some explosions.

The last story is a bit in contrast with his actions on the 13th. I hope someone has a better source and can clear this out.

(looking forward to read this thread :) )

Where did Hug win his KC?

Jacky
by Kameraden
Don't have the specifics.

Just that On the Northern Part of the Polish Border 1944.
by Tolga Alkan
Very good topic,
i will write my favorite later,thank you for idea.

Tolga
by Tolga Alkan
Here my favorite,article from Will Fey's book:


The Knight's Cross for a Panzer Driver

Not much was said during the war about Panzer drivers.They steered their vehicles dutifully as ordered by Panzer commanders.However,they,too,took a deciding role in the courseof combat as proven by the actions of Unterscharfuhrer Hans Thaler.He was awarded the Knight's Cross for his understanding courage.
Three medium Panzers of 6.Pz.Kp./2."DR" rolled across the steppe,moved up a hill,and were suddenly suprised by by fifteen Soviet tanks.Within a few minutes,the Panzer driven by Hans Thaler knocked out threeT-34s.
Then something roared against its skin of steel and shook the Panzer.The heavy hit destroyed the steering mechanism and ripped off the gear box.The commander contemplated the situation and shouted into his throat microphone:"We've had it"
But Hans Thaler had not had it.With a few pieces of wire,and using all his strength,he made the Panzer maneuverable again and got it going.In less than one half hour this Panzer succeeded in knocking out seven more enemy tanks.This success was solely due to the courageous and delibrate actions of Hans Thaler.
He,however,remained quiet and modest,and wore his award on behalf of all the Panzer drivers who silently did their duty.He died a soldier's death on 7 April 1945 during the fighting for Vienna,as a Panzer Commander.

I dont have a favourite action but I start with the two first Heer officers (not to let this thread get too W-SS sided :-) ) receiving the Ritterkreuz. Source is the original proposal document:

Oberleutnant Steinhardt and Leutnant Stolz, both from Inf.Rgt.51, received the Knights Cross of the Iron Cross from the Führer and highest commander, because of bravery at the battle for Fort II near Warschau.

Olt. Steinhardt commander of 2.Kp. was ordered on the 25.Sept.1939 to find out the whereabouts of enemy positions. He found out that the poles secured their positions by wire-obstacles. In the morning of 26.Sept. 4.30 Olt.Steinhardt ordered his company to assemble for the attack on the Fort which was defended by about 120 men. At 4.30 the Fort was surrounded in the west, south and east. The company was lying directly in front of the wire obstacle. Shortly before dawn the company was hit by heavy fire from polish infantry positions 20m away. At once Olt. Steinhardt attacked together with 10.Kp./I.R.51 lead by Lt.Stolz and took the enemy positions.

Lt.Stolz reported voluntarily for this attack. Lt.Stolz lead his company forward and passed the Fort in the west. As he realized that the company of Steinhardt was under heavy fire and was not able to advance Stolz took two platoons and the light machine gun group and started a frontal attack on the fort. He cuts a passage through three heavy wire-obstacles advanced and was stopped by the water trench. Under heavy fire he evades to the right encountering a polish AT-gun in position. The crew is captured and the gun turned around. As the enemy resistance at the main-entrance was broken by AT-gun fire Stolz attacks the fort again from behind across the bridge. Especially the Kompanietrupp under UO Scheel acts very brave in this situation. Heavy enemy fire out of the fortification especially out of one room was going down on the attackers.

In the meantime the remaining two platoons had heavy casualties by enemy fire from buildings around. To secure his back Lt.Stolz took his third platoon that cleared the houses with grenades, mortar and bajonet. Under heavy fire from the fortification Lt.Stolz finally reached the wall of the fort with one platoon and the light M.G.-group. Now the first polish soldiers surrendered while others continued to resist. The rest about 70 - 80 men surrendered after short fire fight. The 10.Kp. finally reached the eastside of the Fort like ordered,

After the battle it was clear that this success was only possible because of the perfect teamwork of Stolz and Steinhardt. With the screen of Kompanie Steinhardt the 10.Kp. was able to advance and take the east side of the fort.

On the eastside of the fort the attacker again received heavy mortar-fire and again the company was showing great morale as they took a captured polish gramophon and played polish hits under fire. If someone of this company wears the Knights cross nowadays he surely has to thank the Btl. commander Major Kuhnert who teached them best fighting skills he had learned in the last World War.

Olt.Steinhardt, born 1911 in Glaubitz, district Risa, joined voluntarily the I.R.7 in 1932 and was promoted to Leutnant on 1.Okt.1934. At the beginning of the campaign he performed great in battle at Racyszin. 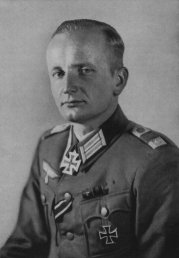 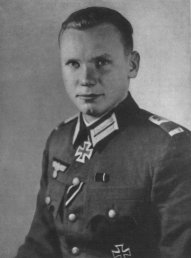 by Jason Pipes
Excellent posting Christoph! I will add this info to the KC database ASAP!!

by Vicgonz
What about Kurt Knispel?....with 162 victories i'm sure this soldier must have an interesting history. Can anybody post something here?
Regards
Victor
by Tolga Alkan
if i am not wrong,Kurt Knispel was not a RK holder.His story covered in Kurowski's Panzer Ace book.

by FELDMARSHALL_VON_DU_CAP
Good thread man!!
by Fox 2/23
I have seen a picture of Mooyman recieving his Knights Cross from Brigadefuhrer (von?)Scholz. He is also wearing the Iron Cross 1st Class and the ribbon for the Iron Cross 2nd Class in his tunic. I suppose Mr. Mooyman was just having a bad day and didn't want to be bothered!
All times are UTC-07:00
Page 1 of 6
Powered by phpBB® Forum Software © phpBB Limited
https://www.phpbb.com/