Hello folks some info about this Unit I've found in the web.

was raised in Stendal, Wehrkreis XI, in October of 1937 as the reconnaissance battalion of the newly motorized 13. Infanterie-Division (mot.). When mobilized for the campaign in Poland in September of 1939, it was organized with:

The battalion was supposed to have three instead of two companies, but the three-company organization had still not been completed by the outbreak of the war. For both the Polish and French Campaigns the battalion would operate with only two companies. The third company, a heavy company, would only be added before the invasion of the Soviet Union.

Kradschützen of 1. Schwadron deploy in a woods in Poland in September 1939. Most of the men are wearing riding goggles and all are wearing rubberized rain coats to protect them from the elements while riding their motorcycles at high speed. Both the coat and goggles were standard issue to Kradschützen.

While the bulk of the division remained behind to secure the Weichsel bridgehead and conduct mop-up operations in the woods around Radom, the A.A. 13 was freed and set off in the direction of Lublin. Advancing through the retreating Poles, the battalion was able to push as far as 12km from the city.

Near the end of September, with the Soviet Union having entered into the war against Poland on the 17th, elements of the 13. I.D. (mot.) had several encounters with the Red Army, including a mistaken exchange of fire between scout cars of the A.A. 13 and an advance detachment of the Red Army. This incident prompted both sides - the Germans and Soviets - to arrange a meeting to negotiate the two armies’ respective boundaries in the area east of the Wieprz River. On October 1st a delegation from the 13. I.D. (mot.), headed by the division’s Ic and under the full authority of XIV. Armeekorps (mot.), was sent to negotiate territorial boundaries with the Soviets. Three armored scout cars of the A.A. 13 accompanied the delegation on its trip. The delegation party, including the three armored cars of the reconnaissance battalion, did not return. Operations on the following day revealed that the delegation and escorting armored cars had driven directly into a Polish cavalry unit and were destroyed, with the armored cars left burning from anti-tank fire. It is not clear whether the three photos in the above sequence show the destroyed armored cars of the delegation, or simply other armored cars of the battalion that had been destroyed in the Polish campaign. Given that the Sd.Kfz. 232 (Funk) depicted in two of the photos would have come from the company troop of the armored car company, there is the possibility that these are in fact photos of the delegation’s escort.

Two different views (above and below) of a Sd.Kfz. 232 (Funk) armored car of 1./Aufklärungs-Abteilung 13, 13. Infanterie-Division (mot.) ([from 6.9.39] Generalleutnant Paul Otto) knocked out during the campaign in Poland 1939. The armored car’s radio antennae have been ripped or blown off and can be seen on the lying on the ground in the second photo. The Sd.Kfz. 232 (Funk) had been developed in the early- to mid-thirties to replace the 6-wheeled scout cars that had originally entered German service in 1933. Along with three other 8-wheeled models, the Sd.Kfz. 232 (Funk) entered service in 1938.

The third photo (below) shows what appears to be the burnt out wreck of a Sd.Kfz. 222 or Sd.Kfz. 223 (Funk) armored car. The vehicle’s turret is either not visible from this angle or has been blown off, so it can’t be determined if it was a radio car or not. Taken around the same time as the two photos of the destroyed Sd.Kfz. 232 (Funk), this may also either be one of the delegation’s escort vehicles or simply another armored car of A.A. 13 that was destroyed in Poland. The Sd.Kfz. 222 and Sd.Kfz. 223 (Funk) entered service in 1937 as light scout cars intended to supplement the heavy 6-wheeled scout cars for reconnaissance duties.

your information from the net agrees with Hoffmann, Die Magdeburger Division. AA13 had only 2 (!) Kompanies 1939-1941 because of the lack of equipment, supplies (men/equipment) came from AA 2.

Hello Thomas, I really would like to get some info from that book,:roll: but I'm afraid you'd look at me as a real beggar

Hello to all people; just to close the circle......take a look here

If someone could add something more from the Divisional point of view, it would be really appreciated. TIA. Regards. Tigre.
Serás lo que debas ser o no serás nada. General José de San Martín.
Top

This series of photographs was taken during a parade held on April 20, 1939 in Stendal, the hometown of Aufklärungs-Abteilung 13, to celebrate the birthday of Adolf Hitler. 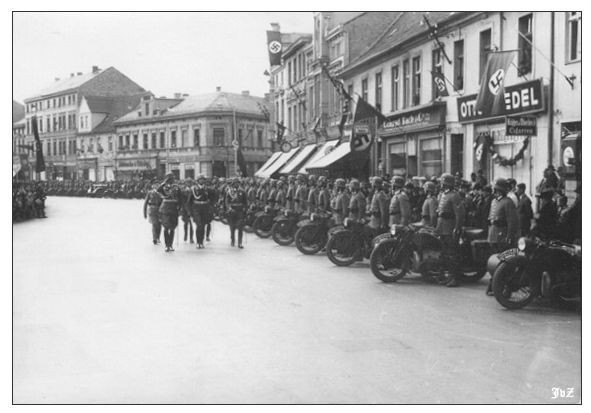 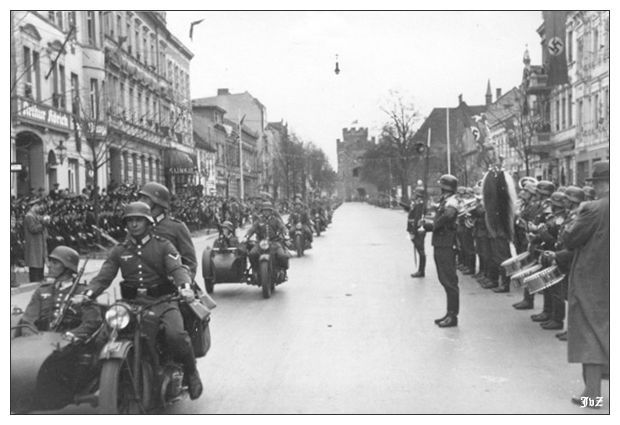 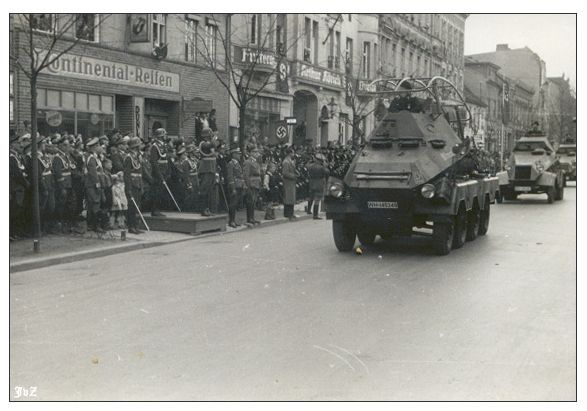 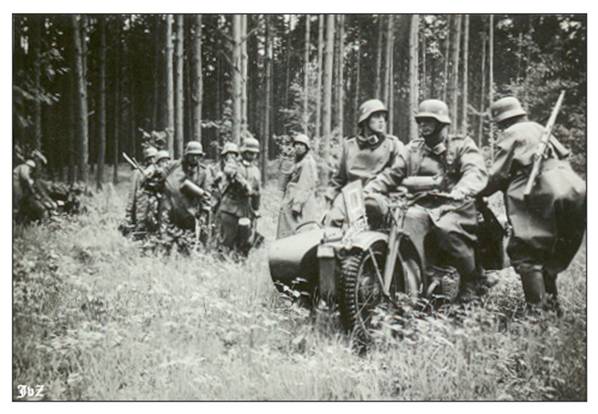 Kradschützen of 1. Schwadron deploy in a woods in Poland in September 1939. Most of the men are wearing riding goggles and all are wearing rubberized rain coats to protect them from the elements while riding their motorcycles at high speed. Both the coat and goggles were standard issue to Kradschützen..... 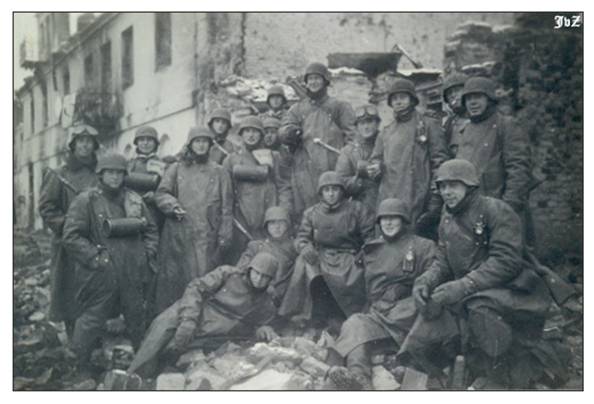