In James Lucas' book on SS Div. Das Reich, he mentions that a battery of SPs was incorporated into the division for the first campaign in the east.

Since the term SP could apply to anything from vehicle-mounted artillery to tank destroyers to StuGs, does anyone have any clarification on what type of SPs would have been in the division in summer 1941?
Top

These were short-barreled StuG IIIs. 7 of them to be exact

Thanks! Any idea how the unit was organized (i.e. was it part of the artillery battalion, one of the infantry regiments, or its own formation within the division?).
Top

IIRC, and I don't have the divisional history at hand, it was independent.

Re: "Das Reich" SPs during Barbarossa

Nigel Askey in his work also stated Das Reich had on hand seven StuG III (see below). But others sources (several) stated that the first unit created is a simple Battery formed at the beginning of February 1941. It includes 6 StuG.III Ausf.B instead of the 8 planned, it is subordinated to SS-Art.Ersatz.Rgt. in Berlin.

The unit is operational in mid-March and is under the command of SS-Haupsturmführer Joseph Günster. The Battery is made up of 3 Züge (platoon) and includes a total of 8 guns. Each StuG III bears a baptism name painted on the sides as follows: "Seydlitz", "Schill", "Prinz Eugen", "York", "Lützow", "Ziethen", "Blücher", and "Derfflinger", the first being that of the Battery Cdr. One of them "in black"?? 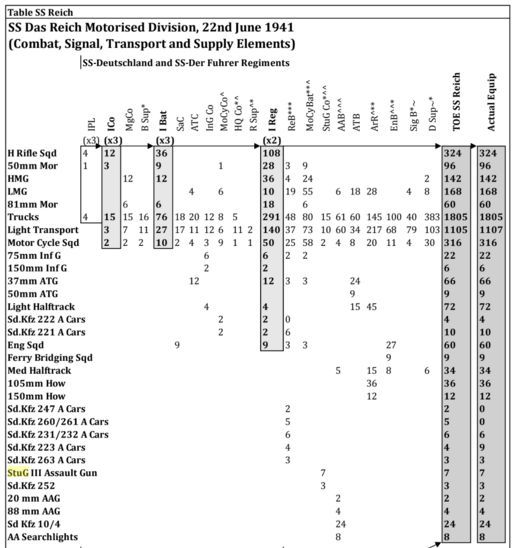